Hey, you can only buy 3 of these.
Leave some for the rest of us!
Update the quantity in your cart.
Refurbished
Grade B - Scatch & Dent
7.9"
Limit 3 per customer

Those things always made me hungry for candy... Especially Big League Chew... Which was kind of messed up when you think about it: Here, kids! Try some fake chewing tobacco! 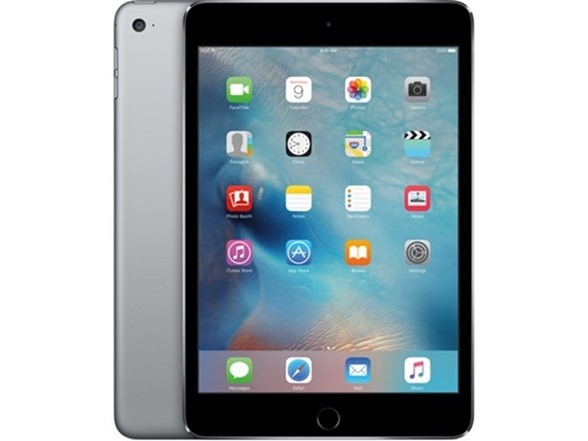 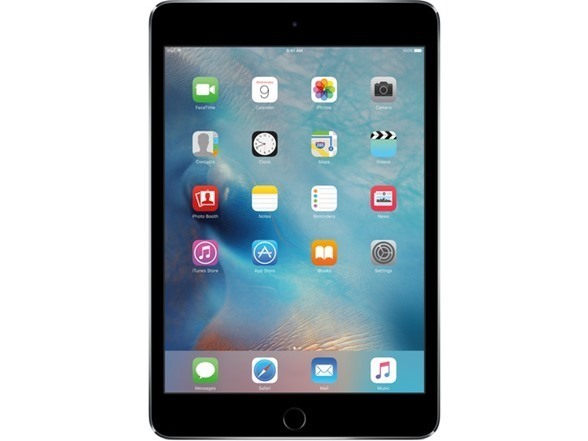 1-year protection plan: $37.99 Buy Now
Hey, you there! These items are expected to have a moderate level of wear & tear including (but not limited to) scratches, dents, and dings. Outside of their physical appearance, they have been tested to be in full working condition.

The Retina Display of the iPad mini 4 has been designed with all components combined into one layer. This helps eliminate gaps between layers, as well as the internal reflectance caused by those gaps. This helps the 7.9" 2048 x 1536 touchscreen render lifelike colors, text, and images with improved contrast, sharpness, and vividness at 326 pixels per inch and a total of over 3.1 million pixels

Apple A8 Sytem on a Chip

When you're in motion, the M8 motion coprocessor continuously measures data from the accelerometer, compass, gyroscope, and barometer. This helps offload work from the A8 chip for improved power efficiency. The motion coprocessor also continuously calibrates all five sensors, so when you want to play a game or use Maps, iPad mini 4 is ready and able

To get improved graphics performance out of the A8 chip and iOS, the iPad mini 4 takes advantage of Metal, an Apple technology that lets developers design immersive console-style games. Metal is optimized to allow the CPU and GPU to work together and deliver detailed graphics and complex visual effects

The A8 chip isn't just powerful; it's also power efficient. With up to 10 hours of battery life, it can handle work, play, and more.

The f/2.4 iSight camera has been re-designed with an 8-megapixel sensor that captures images at a native resolution of 3264 x 2448 and 1080p HD video. The image signal processor in the A8 chip also features improved face-detection technology to keep more - and smaller - faces in focus as well as improved noise reduction. The camera also features time-lapse video, exposure control, 120 fps slo-mo, a burst mode, a timer mode, and a high-resolution panorama mode

Put a face - or two - on every conversation. The 1.2-megapixel front-facing FaceTime HD camera is equipped with 720p video and has an f/2.2 aperture that lets in more light. Its sensor and pixels help improve performance in low-light conditions, while dual microphones employ noise-reduction technology to help suppress background noise. In addition, when you switch cameras from front to back (or vice versa), the microphones switch too, so what your iPad sees is what it hears

With Touch ID, you can use your finger and the Home button to unlock your iPad. Touch ID also has 360° range, so no matter how you're holding it - portrait, landscape, or anything in between - your iPad knows who you are. Touch ID also unlocks more than just your iPad and allows you to sign in to secure apps, make one-touch purchases in iTunes, iBooks, the App Store, and through Apple Pay

Thanks to two 2.4 GHz and 5 GHz antennas and MIMO (multiple-input multiple-output) technology, the iPad mini 4 can reach download speeds of up to 866 Mbps with its 802.11ac connection. So now when you want to download a movie, share photos or documents with AirDrop, or just browse the web, your connection is even faster than before

Shipping Note: Shipping to Alaska and Hawaii is not available for this item. A physical address is required for delivery. No Military or PO Box shipments available