Hey, you can only buy 10 of these.
Leave some for the rest of us!
Update the quantity in your cart.
Refurbished
Series 4 GPS + Cellular
Limit 10 per customer

Your Choice - iPhones and Apple Watches

If these phones were a band, one of the + phones would play bass... the bass player is always a big'un. <3 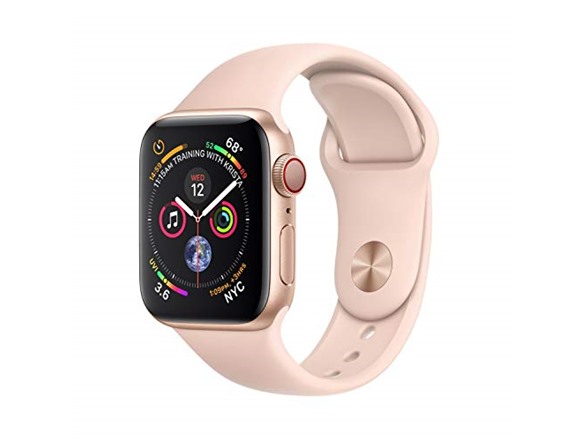 Hey, you there! These items are expected to have a moderate level of wear & tear including (but not limited to) scratches, dents, and dings. Outside of their physical appearance, they have been tested to be in full working condition.

All-New Design. Not just evolved, transformed.
Series 4 represents a fundamental redesign and re‑engineering of Apple Watch. From the curved corners of the larger, all‑new display to the architecture of the S4 chip, every detail has been thoughtfully considered. Apple Watch has always been a uniquely personal product. And now it’s even more powerful.

The largest Apple Watch display yet. This is huge.
The display is the defining feature of Apple Watch, and Series 4 pushes it further than ever. The challenge was to make it bigger without noticeably increasing the size of the case or compromising the battery life. Narrower borders enable a viewing area that’s over 30% larger, while display technology called LTPO improves power efficiency, helping you get through the day on a single charge.

Proactive Health Monitor. Part guardian, part guru.
Apple Watch Series 4 inspires you to live a healthier life by helping you manage everything from everyday stress to calories burned. At the same time, it monitors your heart rate and lets you know if it detects something of concern. And that sense of security now goes a step further with fall detection and Emergency SOS. Apple Watch has your back — as well as your heart.

Ultimate Workout Partner. Workouts that work harder.
Apple Watch Series 4 is more than just a sports watch. It’s like a trainer that understands the ways you work out — from running to yoga to swimming — and puts every metric you need right on your wrist. With innovations from start to finish line, it’s made for the athlete in us all.

Comprehensive Activity Tracker. Made to motivate.
Understanding all the ways you move throughout the day is an essential part of living a healthy life. Apple Watch shows your daily movement as three simple metrics: Move, Exercise, and Stand. Together they make up the Activity rings that track your progress all day long. The goal is to close your rings each day.

Digital Crown. A breakthrough reborn.
The Digital Crown was invented to provide an easy way to navigate on Apple Watch without obstructing the display. With Apple Watch Series 4, the mechanism has been totally re‑engineered. Haptic feedback now delivers a precise, click-like feel as you scroll. And a titanium electrode built into the top allows you to use the ECG app simply by touching it with your finger3.

Challenge yourself by challenging a friend.
Apple Watch lets you share your activity progress from the trail, the track, or even the surf lineup. And now, new Activity competitions let you invite a friend to a seven‑day contest where you earn points based on the percentage of your daily Activity rings you close.

A little coaching goes far.
During a competition, notifications will tell you if you’re ahead of or falling behind your competitor, along with the score. So you’ll know exactly how much you need to move to take home bragging rights. And like a personal trainer, Apple Watch will give you a nudge to close your rings at the end of each day, as well as offer up a new challenge each month.

Ready for whatever moves you.
Whether it’s training for a marathon or swimming laps at the pool, Apple Watch Series 4 has something for everyone. Now including yoga and hiking, the Workout app works every way you want to exercise. You can set individual goals, measure your calorie burn, and track your progress over time in the Activity app on your iPhone. Ready? Go.

Automatic workout detection.
For most popular workouts, Apple Watch senses when you’re moving and alerts you to start the Workout app. It even gives you credit for the exercise you’ve already started. It will also remind you to end your workout, in case you get distracted when you’re cooling down.

The freedom of cellular.
Take a call from the trail. Check in with a buddy over Walkie-Talkie. Keep your workouts going by streaming Apple Music. Or raise your wrist and ask Siri to order your usual. Apple Watch Series 4 with cellular makes it easy to stay connected to the people and information you care about most. Even when you don’t have your phone.
*With GPS + Cellular Models

Shipping Note: Shipping to Alaska, Hawaii, P.O. Boxes, and APO addresses is not available for this item