Hey, you can only buy 3 of these.
Leave some for the rest of us!
Update the quantity in your cart.
New
$34.99
Limit 3 per customer

The more you know (about pillows)!

While pillows are now commonplace in bedrooms around the world, what few people realize is that the pillow itself is a fairly recent innovation. It’s true! The first modern pillow was actually invented in the seventeenth century.  All ancient art depicting pillow-like forms are purely speculative.

What’s more, like many great innovations, the pillow was invented by accident, and it took many years before its appropriate was discovered. Here is a brief timeline:

1635: Lowly infertile colonial sheep farmer Jedidiah Pillow fills a cloth bag with course excess wool. As the wool had been sheered from his favorite sheep, Jedidiah Jr., he feels too emotional to dispose of it, leaving it instead outside of the front door to his ramshackle house. In his notebooks, Pillow writes that, upon his wife’s return home from town, “she remarketh upon there being a much desirous and comfortable new welcome rug outside.”

1637: Having failed to sell his invention as a welcome mat, Pillow rebrands it as a door silencer. He writes: “The wool-bagge, I’ve discovereth, can be laid ‘gainst the wall whereupon the door openeth to, thus muting its foul clatter as it makes impact.” This use also failed to gain traction.

1640: Against the elements of the winter, Pillow markets his invention as an insulated window filler. While effective at containing the heat, its blocking of the sunlight ultimately renders it unmarketable.

1642: When his wife falls victim to a fit of hysterics, thrashing and screaming so intensely that she must be relegated to the bed all day, Pillow places his wool-bagge under her head to keep her from sustaining any neck injuries. He then leaves to tend his sheep, coming back hours later to find her soundly asleep.

Thus, the pillow as we know it today, was born! And no, don’t Google it! 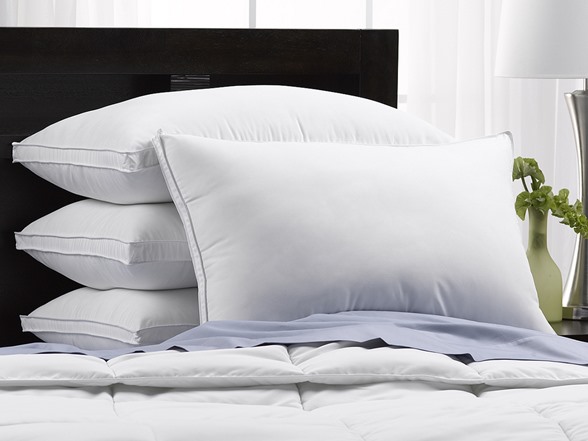 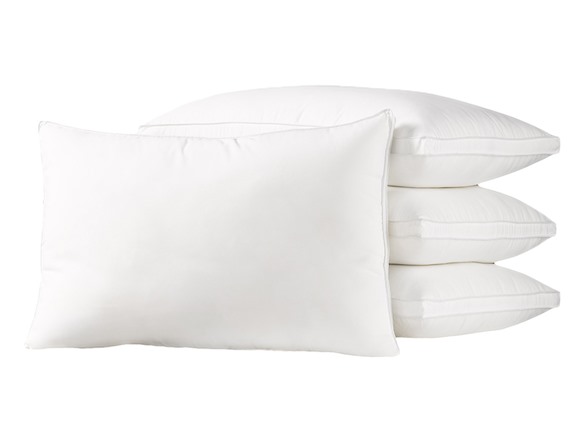 Never compromising on quality and comfort, these pillows provide a soft down like feel with the additional support provided by a unique Gel Fiber fill. The Gel Fiber fill utilizes an ultra-slick superfine fiber that gives a soft yet supportive feel and is easy to care for. The shell surrounding the unique fill adds to the sleep experience with a luxuriously soft brushed microfiber and incorporates a piped gusset edge for additional loft. This Soft option is designed especially for stomach sleepers and can be double stacked for back and side sleepers.