Hey, you can only buy 15 of these.
Leave some for the rest of us!
Update the quantity in your cart.
Red
Limit 15 per customer

The truth is that this “greatest thing” nonsense didn’t start right away. No, slicing bread went back to the very first moment someone had a loaf and a pair of dirty hands. The reality is that sliced bread isn’t the invention in question. It’s PRE-sliced bread that changed the world.

But even then, what was the big deal? It saved maybe… oh, fifteen seconds of Mom’s time when making lunches. BIG DEAL. For people who grew up in a world where knife fights were the primary form of entertainment, fifteen seconds with a knife wasn’t anything at all.

No, the big deal with “sliced bread” was that finally, FINALLY, there was a universal standard on which everyone could agree. No more “where I come from, this would be better than Grandmother’s pudding!” nonsense. What good what that do in a house where Grandmother made terrible pudding? No, the sliced of bread wasn’t the important thing. The important thing was that it finally made us all… Americans.

Until Ron Paul smuggled in those stupid English Muffins. WE HAD A SYSTEM, RON. IT WAS WORKING.

Wear this shirt: to the bakery! They’ll high five you and probably give you a free lukewarm cross bun as well.

Don’t wear this shirt: because bread is supposed to be TORN not SLICED. And you pour your olive oil from the LEFT side of the bottle? Ugh. How disgusting. You plebeians don’t even understand food at ALL.

This shirt tells the world: “I am the new standard by which all things are measured. Look upon my smooth face and despair.”

We call this color: Red As The Coils Of A Toaster In Use 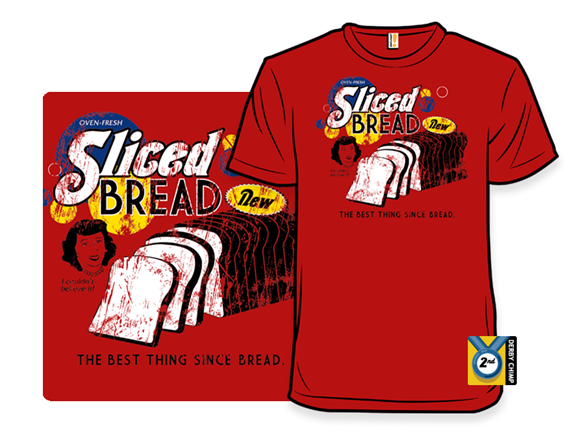 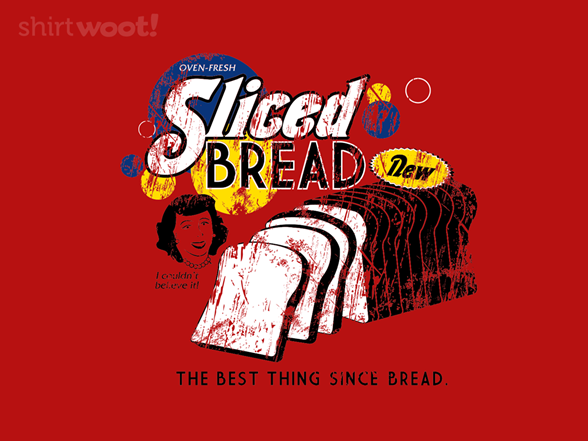 Sizing Chart:
Please check our sizing chart before you order.