The Debunker: Did Coca-Cola Advertising Create the Modern Santa Claus?

Maybe it's the red-and-white suit? Trivia types often bandy about the "little-known fact" that Santa Claus, the jolly symbol of Christmas giving, is not a figure of folklore at all, but was dreamed up in a series of midcentury holiday ads for Coca-Cola. Is Santa really just a soda pop pitchman? Even the Coke website wants you to believe this. "Coca-Cola did help to create the modern-day image of Santa," it boasts, "and in fact the way most of us see Santa Claus – friendly and plump with a white beard – did come from Coca-Cola advertising." 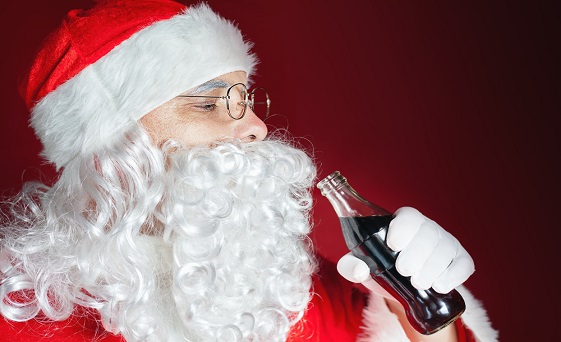 It's correct that the modern image of Santa is an American creation, a synthesis of the Dutch "Sinterklaas" with the British "Father Christmas" that's been filtered through influential works like Clement C. Moore's "A Visit from St. Nicholas" and the political cartoons of Thomas Nast. Lushly painted magazine art, like Haddon Sundblom's Coke ads that ran from 1931 to 1964, did much to popularize the Santa brand.

But did Sundblom's Coke work add anything new to the brand? It's easy to prove that the answer is no: Santa was already Santa before Coke jumped on the sleigh. Take a look at "Hug from Santa," a Saturday Evening Post cover from December 1925, five years before Sundblom's campaign began. The Santa pictured here is 100% what you would expect to see at a mall or in a holiday TV car ad today. Big toy bag, check. White beard, check. Jolly smile and rosy cheeks, check. Round little belly, check. Red suit lined in white fur, with the right hat, belt, and boots? Check. It's all there.

Santa sees you when you're sleeping, and he knows when you're awake, but at least he's not in the pocket of Big Soda. Those Coke-drinking polar bears, however, are another story. Total sell-outs.

Quick Quiz:The late David Huddleston, who played the title character in 1985's Santa Claus: The Movie, is best known to movie buffs for his role as what Coen Brothers title character?