Are you out of school for the summer, or do you have kids that are? Educators worry that lots of their students lose reading skills during the summer, when kids are enjoying their three months of "no more pencils, no more books." But good news! We've brought in Jeopardy!'s Ken Jennings for a little summer reading program of our own. It turns out that a lot of the things we think we know about our favorite children's books are pure fiction.

The Debunker: What Color Were Oompa-Loompas, Originally?

In Roald Dahl's Charlie and the Chocolate Factory, mysterious candy tycoon Willy Wonka makes his magical confections in a factory where workers are never seen going in or out. How is this possible? Outsourcing? Amazon robots? No! Wonka's entire candy enterprise is built on the labor of a group of little foreigners called Oompa-Loompas, transplanted from their homeland to a new village in Wonka's factory, where they live and work full-time. 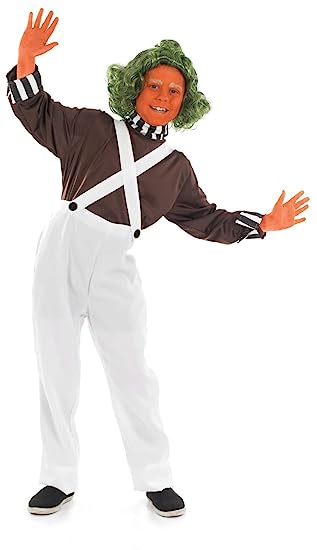 In the 1971 Gene Wilder film adaptation, you probably remember that the Oompa-Loompas are fancifully designed: orange skin, green hair, white eyebrows. In the more recent Johnny Depp film, they all look South Asian, since they're all played by Anglo-Indian actor Deep Roy. Wonka super-fans know, of course, that in the book, the Oompa-Loompas are knee-high hippies. They have rosy-white skin and golden-brown hair, and were rescued by Willy Wonka from near-starvation in the fictional country of Loompaland.

But that's not the Oompa-Loompas' original look! Unfortunately, in the original 1964 edition of Charlie and the Chocolate Factory, there is no Loompaland. The Oompa-Loompas are a tribe of caterpillar-eating pygmies discovered by Wonka in "the very deepest and darkest part of the African jungle." He smuggles them back to England in packing crates, imprisons them in his factory because they hate the cold climate outside, pays them only in cacao beans, makes them row his river galley, enjoys the folk wisdom of the delightful songs they chant, and even does product-testing on them. The overtones of servitude and slavery are…hard to miss. Dahl insisted this never occurred to him, and defended his African Oompa-Loompas as much more likable than the horrid white children in the book. But when the NAACP and others complained, he understood the objection. In 1973, he revised the book, and in the second edition the Oompa-Loompas became the pointedly white nature children we know today. They're still happy, singing slaves, don't get me wrong! But at least they're not happy, singing African slaves.