The Debunker: Is Robert Frost's "The Road Not Taken" about Individualism?

Okay, first of all, it's "The Road Not Taken," not "The Road Less Traveled." Robert Frost's yearbook and dorm poster and graduation speech staple is, according to Google search metrics, the most famous poem of the 20th century by a wide margin. But, as the New York Times Book Review critic David Orr convincingly argued in a 2015 book, the poem probably doesn't mean what you think it means. 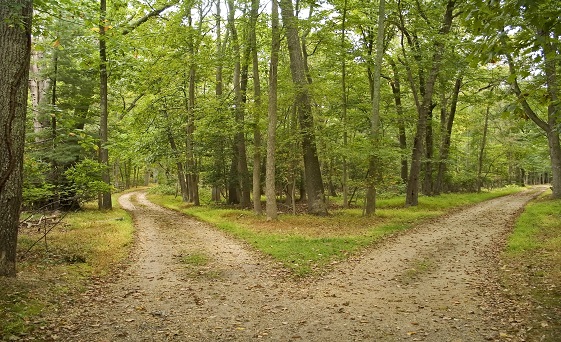 According to Lawrence Thompson's Pulitzer-winning biography of Robert Frost, "The Road Not Taken" was first sent by Frost to his friend, the British poet Edward Thomas, in 1915. The poem was a playful reference to the long walks Frost and Thomas used to take in the Gloucestershire countryside. Thomas apparently had the annoying habit of agonizing over forks in the path, and always lamenting the missed opportunities. Frost saw this as silly "grass is always greener" thinking, and wrote the poem to tease Thomas. Thomas didn't get the reference, and Frost had to write back several times explaining the joke.

Most modern readers, writers Orr, assume we are to admire the narrator for taking "the one less traveled by." What a rugged individualist, in Frost's New England mode! But now that we know the poem's origin, this reading is hard to support in the text. First, the narrator admits that the two paths had actually been worn "about the same"—any impression that one is more difficult or adventurous than the other is more of a private fancy than a factual report. The famous "And that has made all the difference" ending that so impresses high schoolers is meant to be ironic, according to Frost. He told Thomas the narrator's lament is "a mock sigh, hypocritical for the fun of the thing." The narrator here says he will one day paint this choice of roads as a weighty one, but that's just the romantic nature of hindsight. In reality, there was no right road or wrong road. There's just Edward Thomas, standing at a fork in the path and feeling sad that he "could not travel both."

Quick Quiz: : Robert Frost probably reached his biggest audience when he wrote his poem "The Gift Outright" for what 1961 event?