The Debunker: Did Napoleon and Hitler Invade Russia in the Winter?

Have you noticed this thing where young internet people are Very Into History, by which I mean they keep retelling the same six military history stories that were on a podcast or something? I'm actually not as annoyed by this as you might think because hey, at least they know six things about history! It's just like the people posting "SCIENCE, F YEAH!" Sure, that's a little dumb, but would you rather they not be into science? At least they're vaccinated. 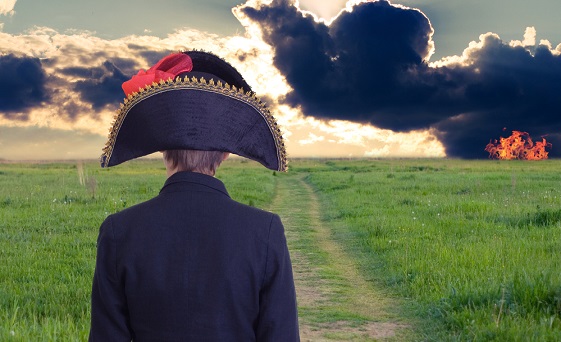 Perhaps the most famous trope of the New Internet Historian is the idea of invading Russian in the winter, a hilarious blunder that none of them would ever fall for. Russia's so big! And snowy! Good luck with that, would-be conquerors from Napoleon to Hitler! The laughable notion of invading Russia in the winter has even made it to social media memes, in which fictional characters like the Night King from Game of Thrones or Wallace Shawn's Vizzini from Princess Bride sneer at the hubris of Napoleon or Hitler thinking they could tackle Russian's vast geography during its punishing winters.

But just try asking one of these memelords what month France and Nazi Germany began their Russian campaigns, and they might be surprised. Both invasions began at exactly the same time of year, within two days of each other: late June. The first week of summer! Napoleon and Hitler were both confident that they could achieve a quick victory before the snows set in. While historians agree that the difficulties of winter tactics and logistics may have contributed to the failures of these invasions, there's some pretty good evidence that weather was not decisive. Napoleon, for example, lost more than half of his army to disease, injury, and desertions by early September. Russians burned fields and villages to starve the French invaders, and so maintaining supply lines turned out to be impossible. Hitler's army also suffered over 700,000 casualties and disastrous supply problems well before winter set in.

Long story short: Napoleon and Hitler both invaded Russia during the summer, and winter is only fatal for Russian invasions if you've already been getting your ass kicked since June. Keep that in mind next time you decide to get involved in a land war in Asia.

Quick Quiz: What Crimean town gave its name to the style of knitted mask often worn by athletes or soldiers in cold weather?