Did People Think the World Was Flat Until Columbus Proved Them Wrong?

1492 was a pretty big deal in the New World. That's the year when strange, pale sailors first starting showing up and making the natives get baptized and dig for non-existent gold. As many people imagine it today, 1492 was a big deal in the Old World too. It was the year that Europe finally woke up from the Dark Ages and realized the world was round. All the superstitious scholars and frightened sailors thought the world was flat and Columbus was going to sail right off the edge—until he bravely proved them wrong. Or so the story goes. 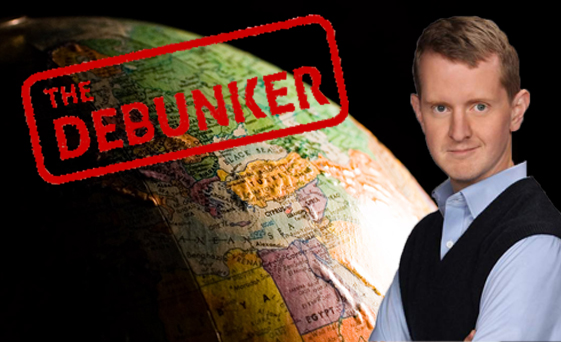 In fact, that's not true at all. It was well understood in medieval Europe that the Earth was a sphere. By 500 BC or so, the Greeks mostly agreed with philosophers like Pythagoras and Aristotle, who observed that the shadow of the Earth moving across the moon during an eclipse was circular, and the Earth was therefore probably a sphere. Eratosthenes, the head librarian at Alexandria, proved this around 240 BC, by placing two straight sticks in the ground hundreds of miles apart and measuring their shadows at high noon on the same day. The shadows were different lengths, meaning that the sticks weren't quite parallel, as they would be on a flat earth.

Eratosthenes's math told him that the Earth was a sphere roughly 24,600 miles around—just three hundred miles off from the actual figure, as it turned out! But Columbus optimistically believed a later estimate by the astronomer Ptolemy, who thought the Earth was much smaller, just 16,000 miles around. That's why Columbus thought he could just sail west to India with no trouble. In fact, all of Columbus's nay-sayers were right: the voyage to India would actually have been four times the length he estimated. He and all his men would have died at sea if there hadn’t been a big, uncharted landmass right in his way: the Americas. So don't believe the hype about medieval geodesy. There might be more flat earth believers on Facebook today than there ever were in Renaissance Europe.