In February, Americans celebrate the birthday of George Washington and Abraham Lincoln—not just beloved leaders but famous symbols of truth-telling as well. Washington wouldn't even lie about his child vandalism of cherry trees (even if that story never really happened) and Abraham Lincoln was "Honest Abe," a lifelong symbol of candor and integrity. Jeopardy!'s Ken Jennings believes that honesty is the best policy, so he's here all February to tell us the truth about the art of lying.

The Debunker: Did Pinocchio's Nose Grow Whenever He Lied?

It's probably the one thing everyone knows about Pinocchio: when he tells a lie, his nose grows. Memorably, in the 1940 Walt Disney film, Pinocchio's wooden nose gets so long after a series of lies that it sprouts leaves, branches, and even a bird's nest. Today, novelty stores sell "Pinocchio noses" for Halloween costumes, and even The Washington Post's Fact Checker column rates untruths on a scale of one to four "Pinocchios." 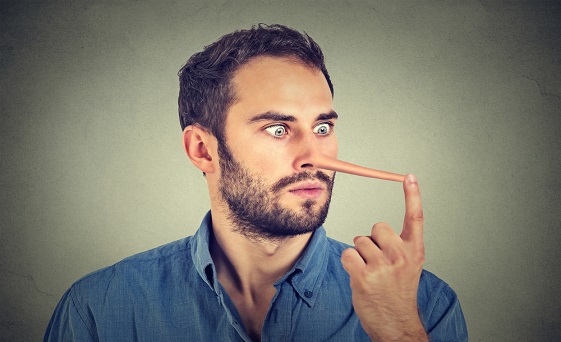 But that's not actually the full deal with Pinocchio's nose. In the original 1883 novel The Adventures of Pinocchio, by Carlo Collodi, the title character's nose grows four times. Twice are when he tells a lie—and in one of those cases he has to be bailed out by the "Blue-Haired Fairy," who sends a flock of woodpeckers to chip his nose back down to its normal size. But two other occasions are unrelated to dishonesty. At first, Pinocchio's nose is already growing out of control while Geppetto is still in the act of carving him, so his unusual nose might just be a function of the magical block of wood he's carved from. Then in Chapter Five, his nose grows when he's hungry and is surprised to discover there's no food boiling on the fire. It's also interesting to note that Pinocchio sometimes tells lies in the book with no nasal repercussions whatsoever.

So it appears that Pinocchio just has a magical nose that reacts unpredictably to alarming situations, and the lying is a separate deal—a moral lesson that he needs to be taught (by the Fairy, presumably). This is suggested in the Disney film as well. The only time Pinocchio's nose grows in the movie follows his only set of lies, but the Blue Fairy then appears, explains that a lie can be "as plain as the nose on your face," and magics the long nose away. She never warned him about this effect of lying, and it's never referred to again. It seems like a onetime deal.

Pinocchio isn't real (though he did finally become a real little boy!) so we'll never have the chance to hook him up to a polygraph and find out what the deal actually is with his weird schnozz. But there are lot of holes in the story that everybody "nose" about him.