Since it's July, we're celebrating North America's most important patriotic holiday. Put that watermelon on ice and stock up on fireworks, because Canada Day is here! July 1 celebrates the Constitution Act of 1867 that unified Canada into a single dominion—but have Americans really studied up on our neighbor to the north, or do we take its many accomplishments for granted? Jeopardy!'s Ken Jennings is not Canadian, but he does live just two hours from the border, and is very pale and polite. All month, he's going to be correcting our counterfactual Canadian conjectures, eh? 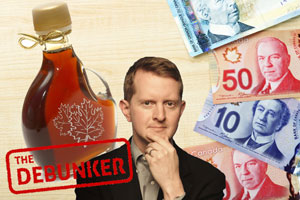 Canada produces 71 percent of the world's maple syrup, about ten million gallons a year. The syrup industry is such serious business north of the border that the government keeps a "Global Strategic Maple Syrup Reserve" to keep the market stable, the way that other government stock petroleum. There are 62,000 barrels of syrup stashed at three high-security sites in southern Quebec, a veritable Fort Knox of syrup. And why not? Maple syrup costs twenty-five times as much as oil—and tastes better on waffles.

When Canada began replacing its paper-and-cotton banknotes with a new synthetic polymer in 2011, two rumors began spreading almost immediately. First, the government began to hear complaints that the plastic bills could deform or melt together when exposed to heat. And even more improbably, citizens were wondering why the bills smelled noticeable of maple syrup. Obviously a scratch-and-sniff patch had been included to foil counterfeiters! News of the maple-scented money spread quickly, delighting journalists on almost every continent.

But, tragically for drive-time deejays looking for weird news to joke about, both rumors were quickly debunked by the Bank of Canada. The new bills are made of polypropylene, which has a melting point of 244 degrees Fahrenheit, so no hot car is going to melt your life savings into a puddle. And government spokespeople insisted that "The bank has not added any scent to the new bank notes," maple or otherwise. A Montreal neuroscientist told ABC News that there's plenty of precedent for olfactory delusion, where people can be convinced that they smell things that aren't there. These cases are "usually triggered by emotional stimuli," she said, noting that Canadians do have a "strong emotional relationship" to their syrup.

Quick Quiz: In what 2003 movie does the title character, Buddy, carry a flask of maple syrup with him everywhere?