It's May, and that means only one thing to all men and women of good will: National Beverage Day on the sixth of this month! We all love a refreshing beverage, but how much do we really know about them? If you're thirsty for knowledge, take a deep, satisfying swig of Jeopardy!'s Ken Jennings, who will be debunking drink-related disinformation all month. As Alexander Pope once said, "A little learning is a dangerous thing, / Drink deep, or taste not the Pierian spring"!

The Debunker: Does Dr. Pepper Have Prunes in It?

The flavor of Dr. Pepper is hard to pin down. It's the oldest soft drink still found on supermarket shelves nationwide, having made its debut at a Waco, Texas corner drugstore in 1885. The company says that its secret formula is a mix of no less than twenty-three different flavors, and the recipe is supposedly split into two halves kept in the safety deposit boxes of two different Dallas banks, so that no single soda-pirating criminal could ever abscond with it. 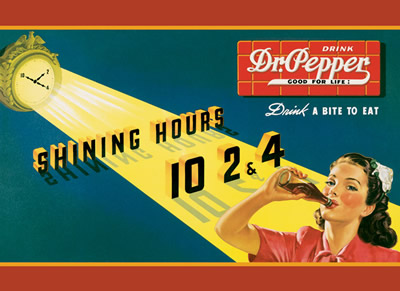 The conventional wisdom that Dr. Pepper is a prune juice-based soda goes back at least to the 1930s, but the manufacturer has always denied this. The only information Dr. Pepper now releases about its "proprietary" formula is that its soda "is a unique blend of natural and artificial flavors; it does not contain prune juice." There seems to be a determined attempt to distance the soda from prunes and all that they signify (old age, unhip eating habits, pooping).

That said, the flavor behind Dr. Pepper isn't some ineffable mystery. As the proliferation of supermarket-brand knockoffs (Dr. Thunder, Dr. Shasta, Dr. A+, Dr. Skipper) will attest, mixing up a reasonable approximation of the Dr. Pepper flavor isn't rocket science. Some commonly mentioned suspects are citrus and cinnamon and especially vanilla—the major flavor ingredients in most colas—as well as denatured rum. But most aficionados think the strongest note is amaretto, which would suggest the recipe is heavy on extract of almond, or some stone fruit like cherries or apricots. Or hey, even artificial prune flavor, why not. All the company says is that it doesn't have prune juice.