We usually think of volcanic eruptions as sudden and dramatic events, but that's not always the case. The Hawaiian volcano of Kilauea, for example, has been erupting continuously since January 3, 1983, covering 48 square miles of the state's "big island" with new lava. In honor of the thirty-fifth anniversary of Earth's longest-erupting volcano, Jeopardy!'s Ken Jennings will be here all month providing explosive corrections to a lot of popular misinformation about volcanoes. The results might just rock your world.

The Debunker: Is Krakatoa "East of Java"?

At the 1970 Academy Awards, a not-very-good Gregory Peck astronaut drama called Marooned defeated a not-very-good Maximillian Schell volcano drama called Krakatoa, East of Java for the Best Visual Effects statuette. Neither film really would have deserved the "Academy Award Winner!" sticker on its video box, but there we are. Krakatoa, East of Java was a Cinerama disaster movie set on the ill-fated Indonesian isle, and opened to widespread moviegoer apathy. It was then re-released a few years later under the title Volcano with a "Feelarama" low-frequency soundtrack added, in the hopes that a booming bass rumble in the eruption sequence would entice audiences. Nope again. 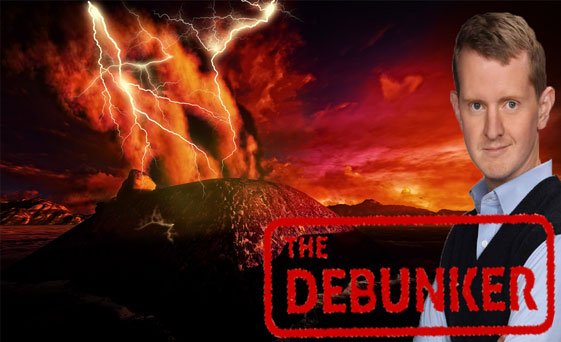 The film is largely forgotten today, apart from one notorious bit of trivia about its title. Krakatoa, the site of a cataclysmic 1883 volcanic eruption, is actually an island in the Sunda Strait west of Java. (You could get to Krakatoa by traveling east from Java, but you'd have to travel around the whole world first.) Accounts differ as to how a big-budget Hollywood production could have screwed up such an elementary bit of geography. Many sources report that Cinerama and director Bernard L. Kowalski preferred the exotic vibe of the word "east," accuracy be damned. But a 1969 New Yorker review claims that the goof was accidental, and was just discovered too late to change all the publicity materials.

In any case, the movie trades on Krakatoa's place, in the public imagination, as the most violent volcanic eruption of modern times. In fact, it was considerably smaller by any measure than the less celebrated 1815 eruption of another Indonesian volcano: Tambora. (Which is east of Java, by the way!) Tambora rates a 7 on the Volcanic Explosivity Index, the only such eruption in almost two thousand years and an order of magnitude worse than Krakatoa's still-impressive 6. Tambora spewed out three times as much rock and ash as Krakatoa, killed twice as many people, and created a "volcanic winter" and famine as far away as North America and Europe. All Krakatoa has to offer in exchange is a crappy Maximillian Schell movie.

Quick Quiz: Cinerama was the brainchild of Mike Todd, the movie producer best known as the third husband of what Hollywood actress?