On August 28, 1565, the feast day of St. Augustine, a Spanish admiral named Pedro Menéndez de Avilés sighted land in Florida. His men founded a settlement there which is still called St. Augustine, making it the oldest European-founded city in the United States. This August, we've asked Jeopardy! champ Ken Jennings to cast his keen, cosmopolitan eye on American cities coast to coast, the better to debunk some misinformation about them that's as old as the hills, almost as old as St. Augustine itself.

The Debunker: Is New Orleans Located Below Sea Level?

When the levees broke in New Orleans in 2005, I heard more than one person (thousands of miles away and unaffected by the disaster, of course!) note, with a smirk and a shrug, that, hey, that's what happens when you build a major coastal city below sea level. But I was shocked when this actually became a political talking point in the post-Katrina conversation. When House Speaker Dennis Hastert (recently in the news again doing prison time after accusations of being a serial child molester!) was asked about rebuilding New Orleans, given its low elevation, he replied, "I don't know. That doesn't make sense to me." 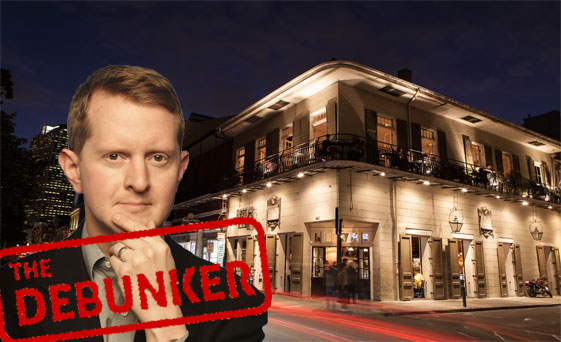 Leaving aside the silly notion that elevation should determine how disaster relief funds are spent, there's a factual problem here. A 2007 Tulane University study found that most of urbanized New Orleans—51 percent of the city's land area, and over half of its pre-Katrina population—actually lies above sea level. In fact, the entire city was above sea level for most of its lifespan. It was only during the last century that soil subsidence lowered much of the city below the level of the Gulf of Mexico.

But that's beside the point, politicians of a Hastert-esque bent might reply. The half of the city above sea level isn't the problem—it didn't flood! But the geographic facts don't bear this out. Many New Orleans neighborhoods devastated by Katrina, including the famously low-lying and flood-prone Lower Ninth, are actually largely above sea level—and certainly higher than nearby neighborhoods like Lakeview, where rebuilding was never in question. Those neighborhoods, in a shocking twist, are whiter and more affluent.

Unfortunately for New Orleans, sea level isn't a fixed quantity. A paper published last year in the Proceedings of the National Academy of Sciences predicted that New Orleans will be one of the coastal cities hit hardest by global warming, with seas rising over six feet in the century to come. If the city is going to survive, it needs a vastly more reliable flood-control system than the Army Corps of Engineers one that failed in 2005.

Quick Quiz: The U.S. state with lowest mean elevation is not Louisiana or Florida, but what state in the Northeast?