The Debunker: What Do Scotsmen Wear Under Their Kilts?

There's a logical goof called the "no true Scotsman" fallacy, in which the speaker consistently re-defines his terms in the face of new evidence. The original case, from a 1975 book by philosopher Antony Flew, imagines a Scot reading a news article about a sex maniac on the loose in England. "No Scotsman would do such a thing!" he says. The next day, he sees a second article about a similar crime spree in Scotland. "No true Scotsman would do such a thing," he still insists. 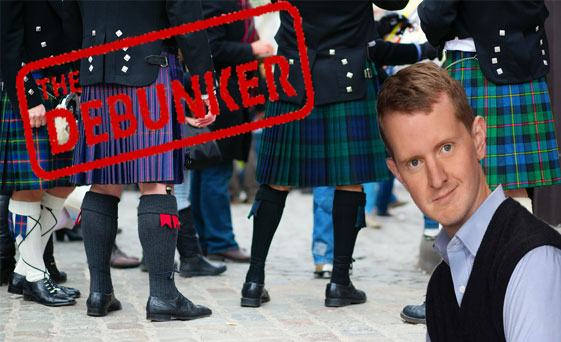 But in Scotland, the phrase "true Scotsman" is most often used for one specific local stereotype: the practice of going underwear-free in traditional garb, even on the coldest days. "A true Scotsman is said to never wear anything under his kilt," the New York Times proclaimed in 2010. This explains the ubiquity of tacky "Official Kilt Inspector" t-shirts at Scottish souvenir shops today.

In fact, the traditional Scottish kilt is a lot less traditional than you probably think. The original Highland plaid was the "great kilt," a belted piece of tartan worn as a cloak from the shoulders. The modern kilt only dates back to the turn of the 18th century, and sources from that era actually credit it to Thomas Rawlinson, an English industrialist! Rawlinson was looking for a less unwieldy alternative to the great kilt for workers at his iron foundry at Invergarry, and proposed a simple waist-down version. A century later, the novels of Sir Walter Scott made Highland culture all the rage in Britain, Queen Victoria herself started looking at listings for a new castle in Scotland, and the rest was history. The kilt was permanently embedded in the popular myth of Scottish culture

But, in fact, the only hard-and-fast rule about what a Scotsman should wear under his kilt came from the military. Around the time of the Boer War and World War I, the Gordon Highlanders and other Scottish regiments preferred to wear nothing under their regimental tartans. "If you wore anything under a kilt you’d have been issued with it," remembered one private. "You didn’t get that issued so you didn’t wear anything." As a result, wearing nothing under one's kilt is called "going regimental" in Scotland to this day. But there was never any such rule for civilians. In fact, many kilt-wearers in dance and athletics are now officially required to wear underwear, to prevent spectators from getting an eyeful. A 2016 poll by YouGov found that fully 62 percent of Scots wore briefs or shorts under their plaid. Just 38 percent go regimental nowadays

Quick Quiz: James Bond is Scottish, but the only actor to wear a kilt as 007 was what Australian, who briefly played Bond in 1969?