It's September and parents are rejoicing, because kids are (finally!) heading back to school! Crayons and binders and graphing calculators are flying off store shelves; beanbag chairs for dorm rooms are getting stuffed into the backs of station wagons. But maybe we all need to be taken to school, because a lot of the stuff we think we know about education would get us an 'F' on the final exam. Ken Jennings, that Jeopardy! guy, will be standing in front of the class all month with his red marker at the ready, to correct all that academic misinformation.

The Debunker: Will You Get Straight A's If Your College Roommate Commits Suicide?

Short answer: YES! But only if you already had straight A's before the tragedy as well. 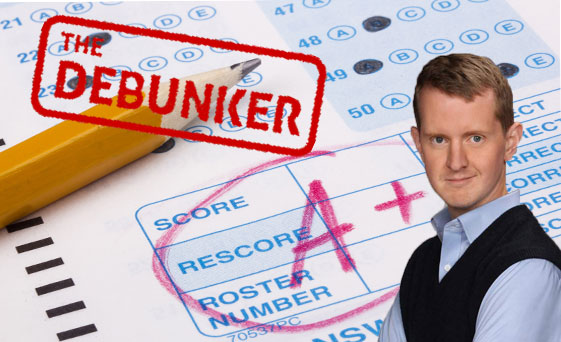 This urban legend—that universities will grant students an automatic 4.0 for the term if their roommate commits suicide—dates back to the 1970s. Snopes.com records " several more baroque variations: a 3.5 GPA if multiple roommates are left behind, a 3.4 for roommates who never saw the body, sometimes a year of free tuition to boot. A few decades later, this belief was so engrained in the culture that it became the premise of two different 1998 movies: Dead Man on Campus with Mark-Paul Gosselaar and Tom Everett Scott, and The Curve with Matthew Lillard and Keri Russell. What exactly was going on in 1998?

As folklore researcher Jan Harold Brunvand found when he investigated the story for his 1989 book Curses! Broiled Again!, no American institution of higher learning has such a "dead roommate" policy in place, though most will make allowances for students who face a traumatic life event during a school term. But these remedies fall far short of the mythical automatic 4.0: Columbia University, for example, recommends asking professors for due date extensions, waived attendance, and make-up exams. Basically the same stuff college students do all the time even when their roommates are still alive and breathing.

Anyone who's actually been in this situation knows that, after a peer's suicide, shock and emotional trauma make GPA concerns look small and silly by comparison. Economist Daniel Hamermesh points out that an "automatic 4.0" policy might cause an adverse selection effect: students would be incentivized to seek out sick or emotionally vulnerable roommates. There might also be a "moral hazard" effect in which lazy students decide to endanger or even murder their fellow dorm residents just to hit that sweet 4.0 jackpot. College students: if you're considering such a thing, please take note that this was already a CSI:NY episode, and the guy got caught.

Quick Quiz: What nineteen-year-old tried to kill himself in Sarajevo in 1914, only to survive because his cyanide pill was expired?